Many of you have long used our anchors of the “DREAM” series. Anchors have proven themselves on the good side. Due to the original shape of the blades narrowed to the end, the anchor excels in meshing with the ground. But as practice has shown, with increased wind and rolling the boat on waves, the process of loosening the anchor in the ground occurs, after which it disengages and the boat tears off the anchor. Our engineers studied this process and designed a so-called anchor extension arm. Its essence lies in the fact that to extinguish the sharp load when the boat rolls on the waves due to the original articulated armature extension system. That is, in calm weather conditions, the anchor and the extension cord lie flat on the bottom in a horizontal position.

But in the case when the wind rises and the boat begins to swing on the waves, an anchor stretcher is coming into operation. That pulls the anchor rope to the bottom due to its weight and hinge structure. 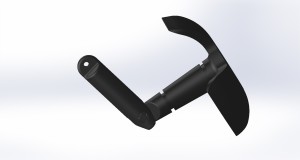 The prototype was tested for a long time on different types of boats and showed itself on the best side.
This extension cable our customers will be able to purchase, as complete with the anchor. It can also be purchased separately and installed on the previously acquired DREAM anchor.